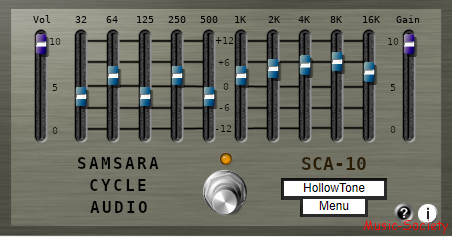 EP-78 is an electric piano.

It was designed to create a vintage electric piano feel. It uses subtle tonal changes that are influenced by velocity. This is not a Rompler or Sample based instrument. It uses various tuned frequencies to achieve its tonal quality. These can be varied using the Timbre control.

The effect of pickup phase is influenced by the Phase control. The Envelope is designed to respond as it would on an Electric Piano and is changed using the Decay control. There is a Treble and Bass control to alter the overall tone of the instrument. The Vibrato section is a simple design and is included an emphasis switch to change the sound of the Vibrato. Emphasis is somewhere between a Phaser and a Chorus and adds a bit more interest to the sound.

SC-3 is a clavinet influenced instrument.

Keys Section: Phase simulates Pickup mixing. Octave can be used to switch between 3 octaves. +Keys introduces a 1 octave higher instrument (this is a subtle effect).

Timbre Section: Tone is used to control the frequency brightness. Timbre Velocity is used to add a level of attack brightness. Experiment between these two controls to introduce various shapes, especially for Twang effect.

Tone Section: Simple cut and boost for overall tone of the instrument.

Shape Section: These controls are used to create various feel to the playing and adjust the envelope of the instrument. The effect of these controls work closely with the Timbre Section.

Amplifier Section: These controls influence the final output of the instrument.
Velocity sensitivity can be increased from less active to more. The distortion control provides a natural saturation to the output.

Mute: This slider simulates a dampen effect on strings.