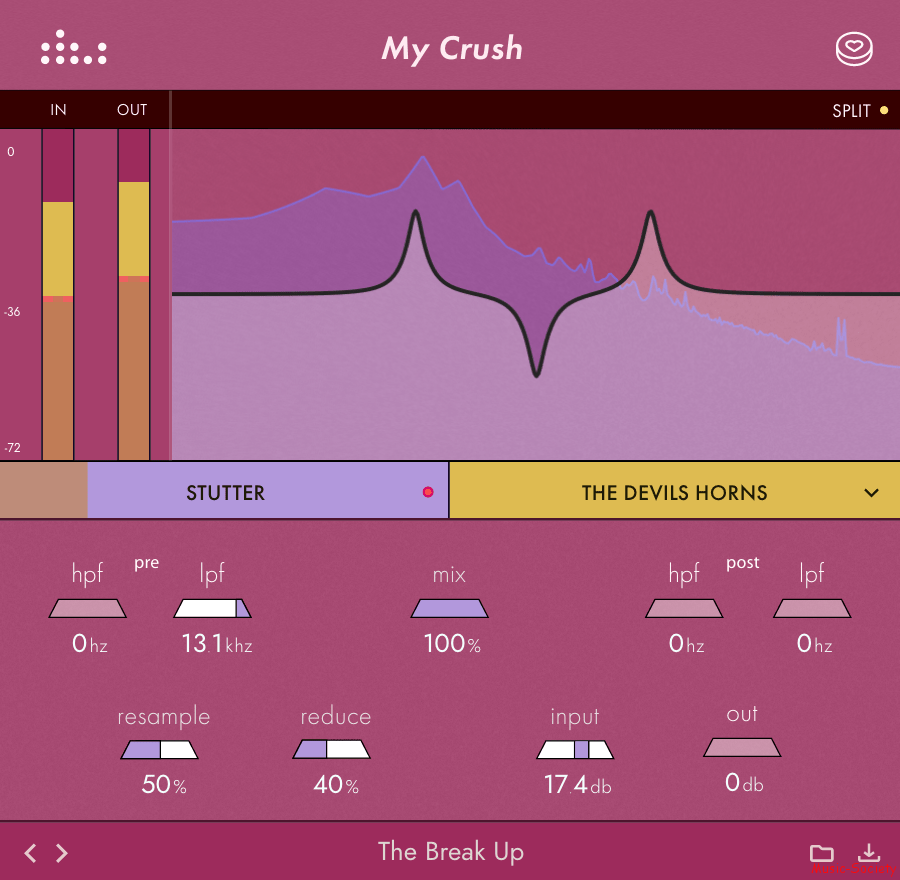 denise wanted to create a fun and inspiring crusher, with the same brutal power of the Bite Harder, but the simplicity of preset controls and way to shape your sound in a quick and inspiring way. My Crush gives you the possibility to create the same, classic bit-crushing tones and audio destruction, in a simplified way, for no cost at all.

The same insane bit crushing algorithm from the Bite Harder drives the My Crush plugin. The individual bit (reduce) and re-sample dials help you to gradually destroy your sound. The stutter fader adds a layer of creativity on top. 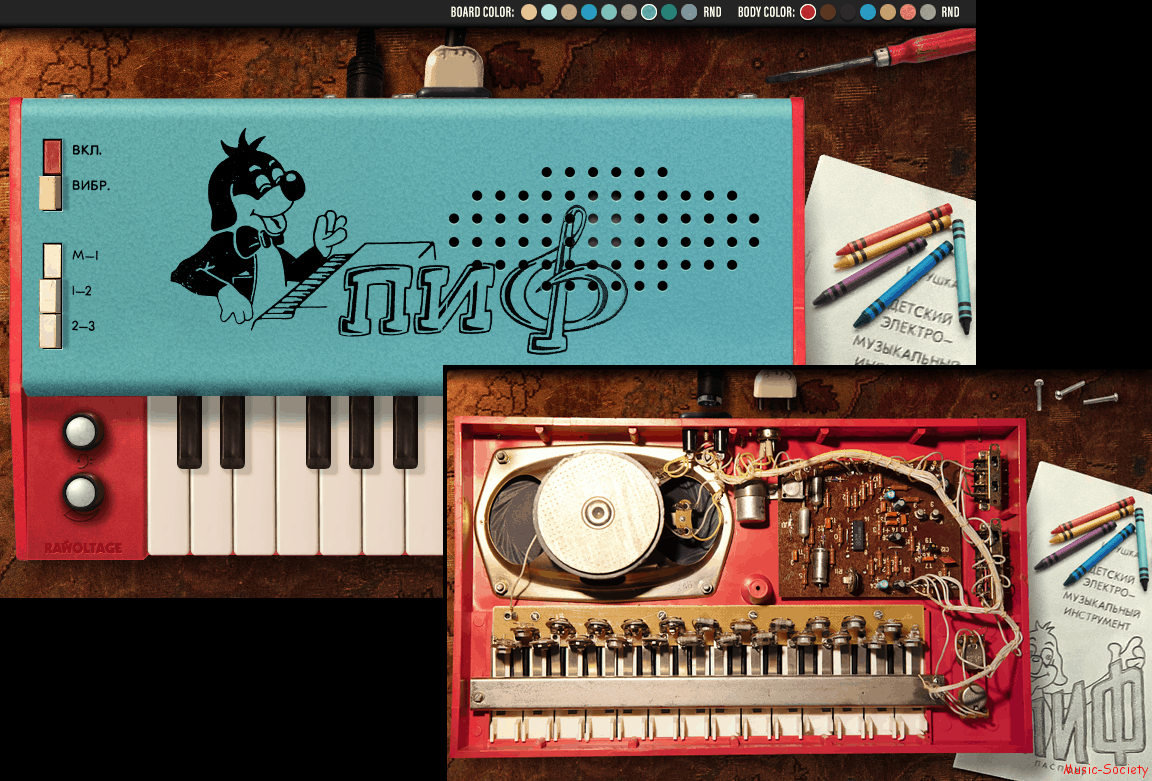 We love little playful synthesizers, which is why we made one of our favorites. An indispensable musical accessory of Russian kindergartens, this little synth is from the 1980s. We modeled both the original tone and the sound we can hear through the speaker. In this emulation, you can view a small piece of history inside and out. It was available in several colors. While playing, even random can change its color, making the synth more fun. 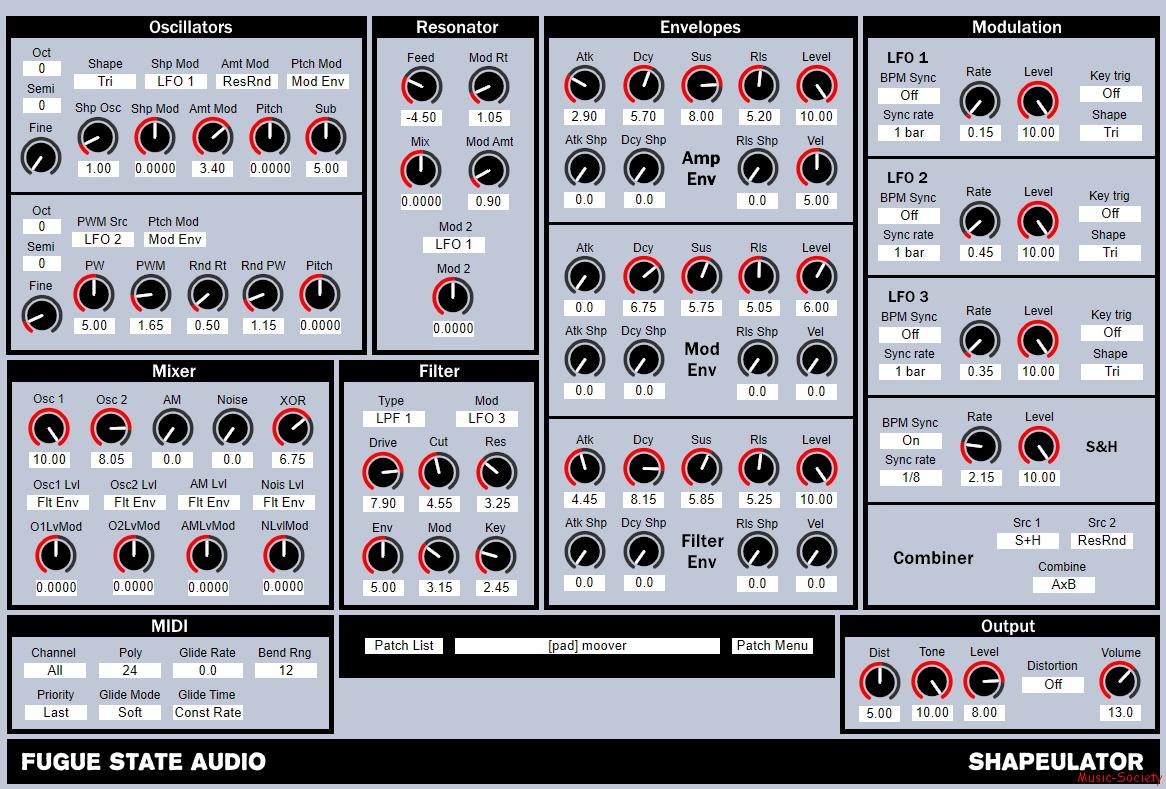 Shapeulator is essentially the product of a modular patching session, and a desire to have the core setup used available for further sound design fun. At the most basic level, it is a subtractive synthesizer, with some additional features that make it especially useful for certain types of pads, fx sounds, and synthetic percussion. 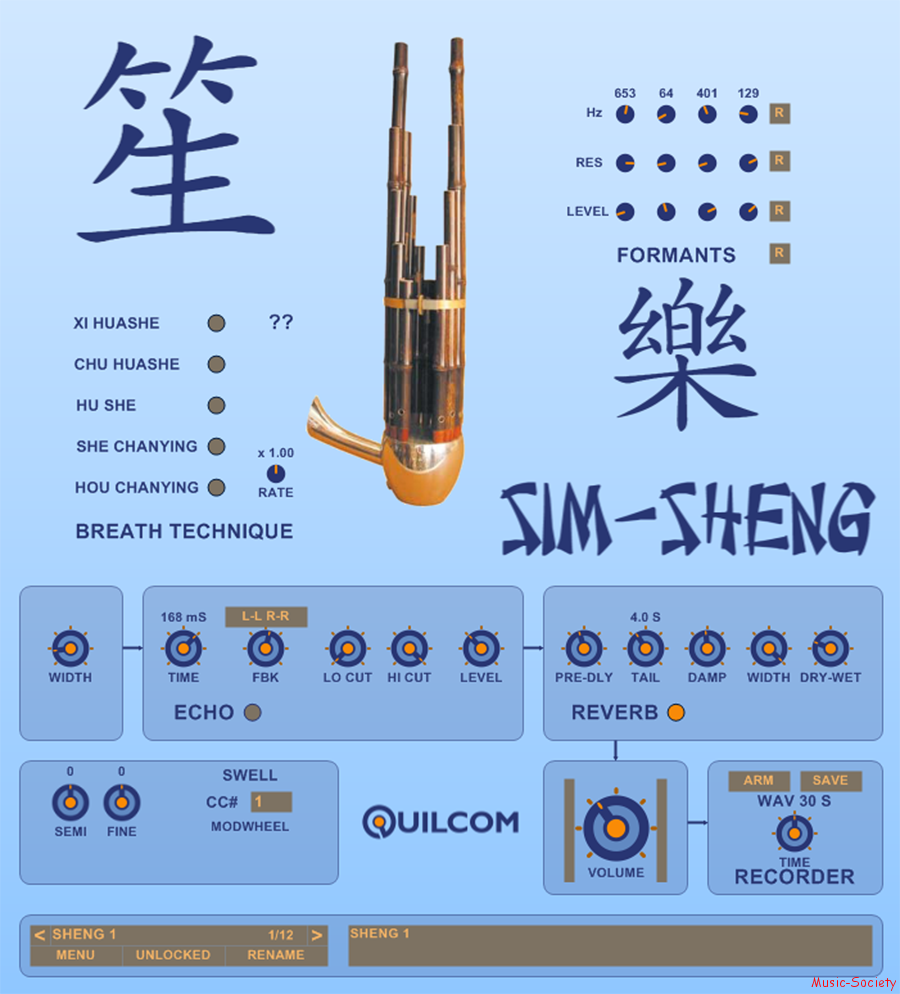 The Quilcom SIM-SHENG is a plugin designed to simulate this ancient class of Chinese mouth organs.

Click on the picture to download the zip which contains 32 and 64 bit plugins and a 32 bit plugin for Windows XP. Also included is a Background info folder so you can learn about the instrument, and a User guide for the plugin.

I always include the fsm file for my plugins which isn’t needed for the plugins to work but is there if you want to download FlowStone and look at the workings and maybe modify it, or use bits and pieces for your own projects. 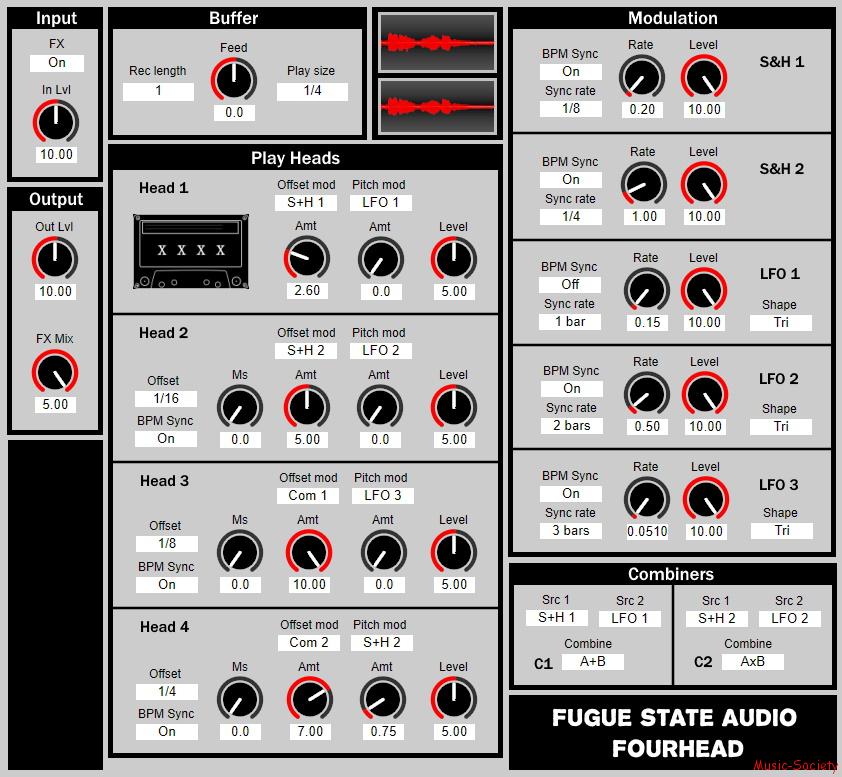 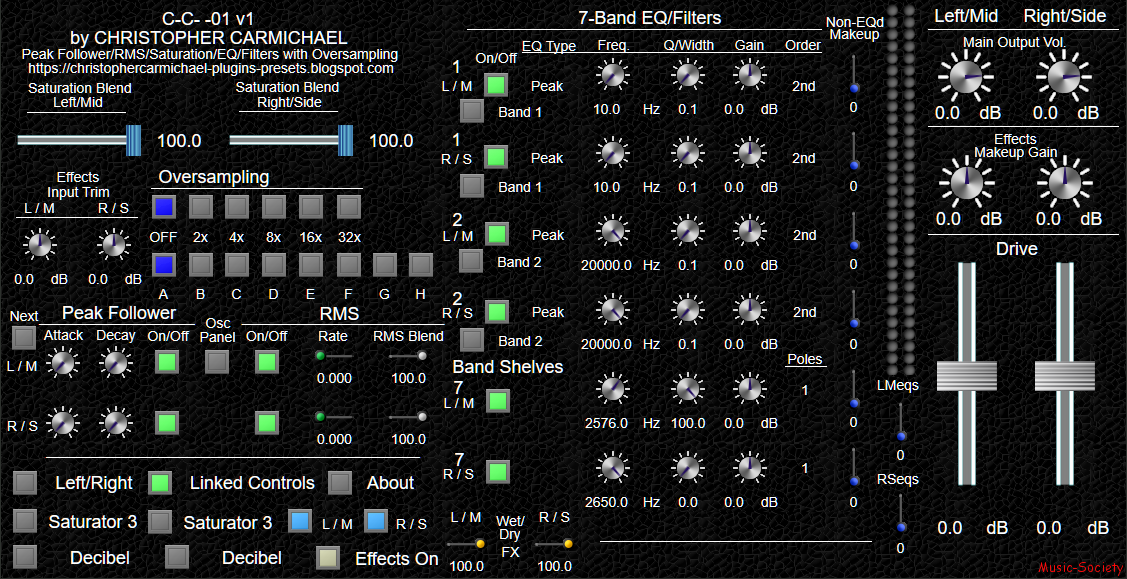 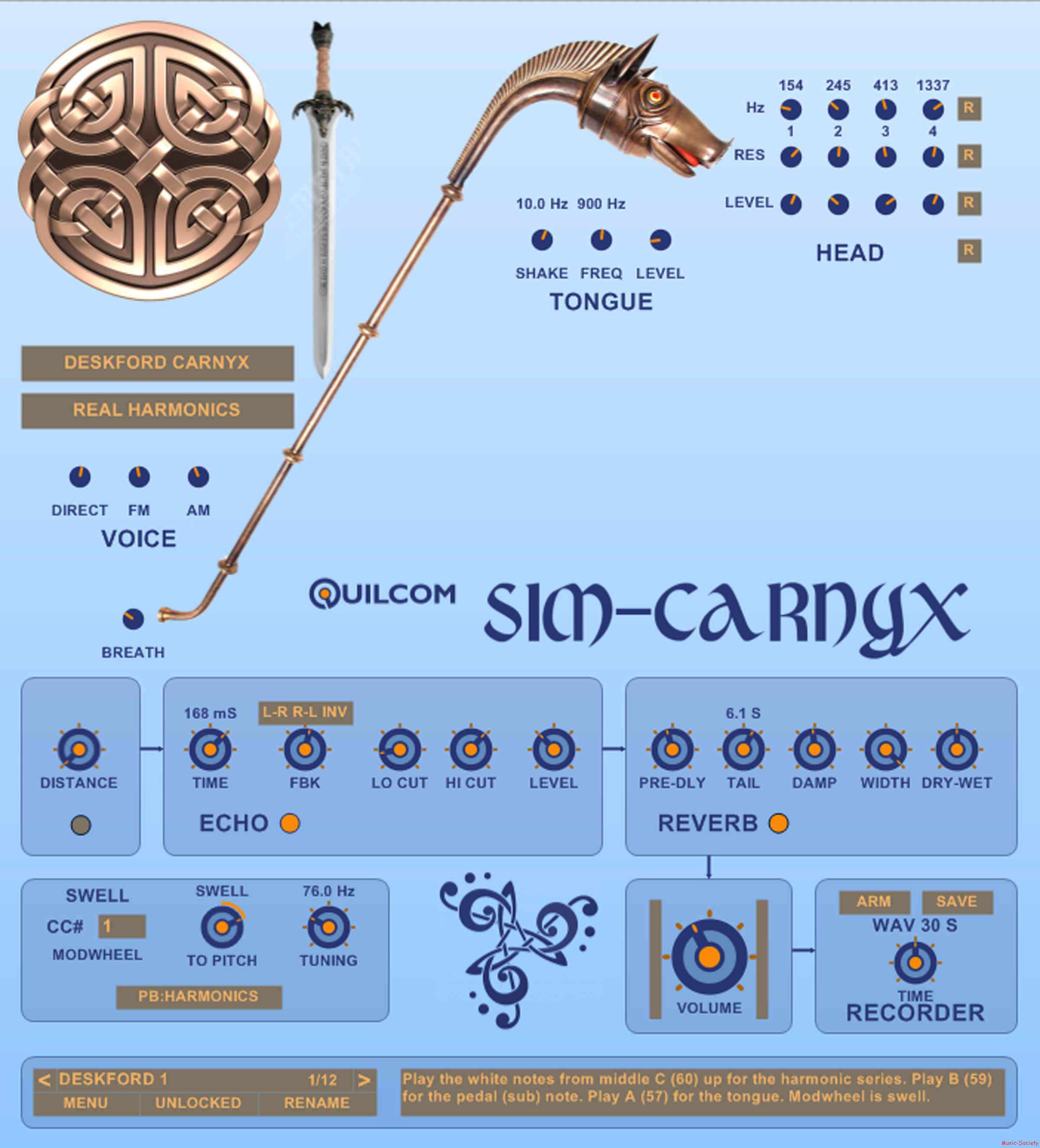 A Carnyx is an ancient Iron Age Celtic war horn used to intimidate the enemy in pitched battles, and it’s not very “musical”. It is, however, fascinating… to me anyway!

There’s lots of info in the Background info folder and User Guide if you would like to know more.

The download includes 32 and 64 bit plugins and XP compatible ones, with and without audio input.

Also you get the FlowStone schematics (not needed for the plugins to work). This means that if you buy FlowStone you can open, examine and alter them as you wish.

Click on the picture to download it, load it up and open all your windows and have fun really upsetting your neighbours! 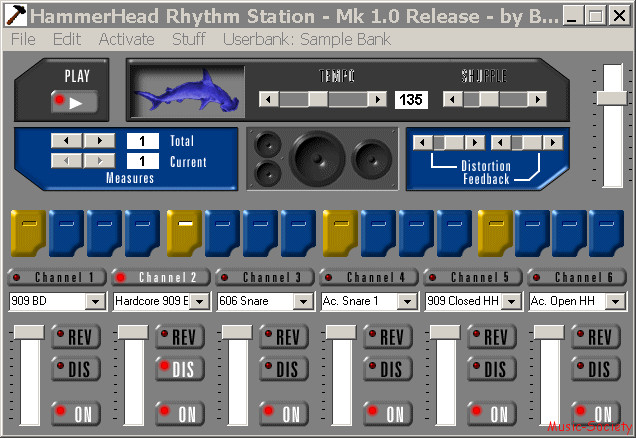 What is HammerHead not ?

HammerHead is not Shareware, it’s Freeware ! No
frustrating save-disabling, no grayed-out-menu-features,
no paying serious money, no annoying messages and
most of all NO TIME LIMIT…

HammerHead is not a Bossa Nova tool… This means
that you won’t find any sucky Tom-Toms, Shakers,
Cowbells, Congas and Bongos in this box… What you
WILL find is cool 909 shit, bad overdriven bassdrums,
lotsa snaredrums, claps, and complete breakbeats to
spice up the lot. Buckets-o-fun for making Jungle.

A MUST-CHECK-IT-OUT for everyone who has always wanted
to make his own block-rocking beats !