Bedroom Compressor is a a diode bridge-based compressor.

This compressor has some great features like a blend knob and a high-pass filter side-chain. This compressor expects a signal in dBU’s, so -18 to -15 is the sweet spot!  It is based on a famous channel strip re-issue. 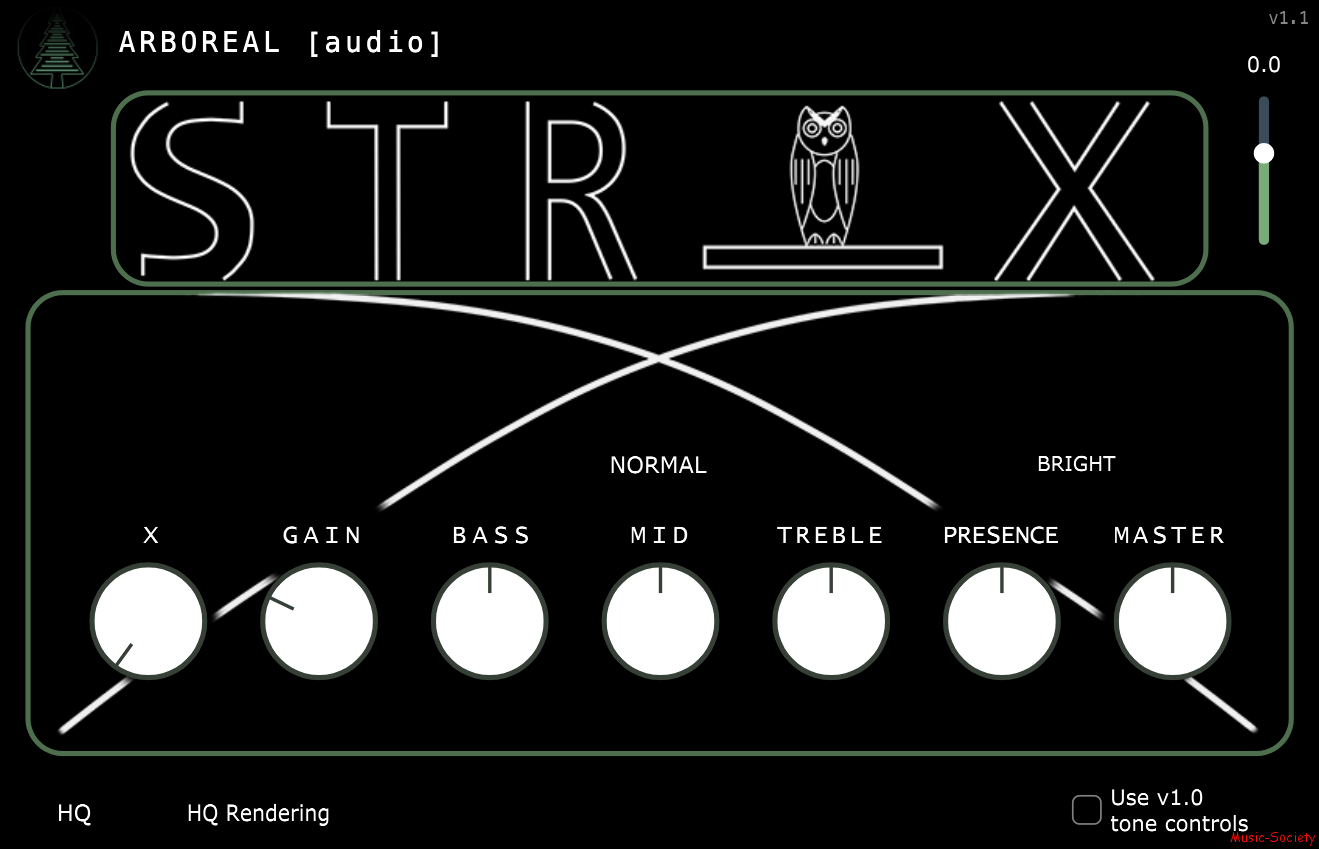 The STR-X was built to be a simple but powerful, digitally-oriented guitar amp, one which isn’t based off of any pre-existing analog models. Tonally, it is capable of high gain, modest crunch, and cleaner tones with some added heat.

Mode: The Mode control in the center of the amp changes the crossover point that feeds the pre-amp distortion (after the “X” pedal-style distortion). Normal will give you a solid low-end, with retained clarity in the mids and highs even when cranked. Thick drops the crossover point lower, resulting in greater intermodulation of the distorted signal, and a fuzzy tone ready for a sludge or doom sound. Finally, Open separates all of the low-end from the mids and highs for a tight and bright tone, perfect for fast palm-muted playing or any situation where the low-end of the other two modes might be excessive.

X: This mysterious knob works like a one-knob distortion pedal (inspired by the Ibanez Tube Screamer), with filters that focus the tone on the mid-range the further it’s driven—good for an extra bump before the amp, dialing in a lead tone that cuts through everything else, or for tightening the bass on Thick mode while still remaining truly Thick.

Gain: This is the pre-amp drive section, ranging from not-quite-clean to a heavy wall of distortion. At high gain, the texture varies significantly, depending on the Mode used. This stage generates asymmetric distortion and both even and odd harmonics.

Master: This knob provides the output gain of the amp, with added distortion as well. Although not claiming to emulate any particular type of tube, it does generate the symmetric, odd-harmonic distortion you’d expect from pentode tubes. With low pre-amp gain, you can use this knob to dial in fairly clean tones down low, and bright crunch up high. 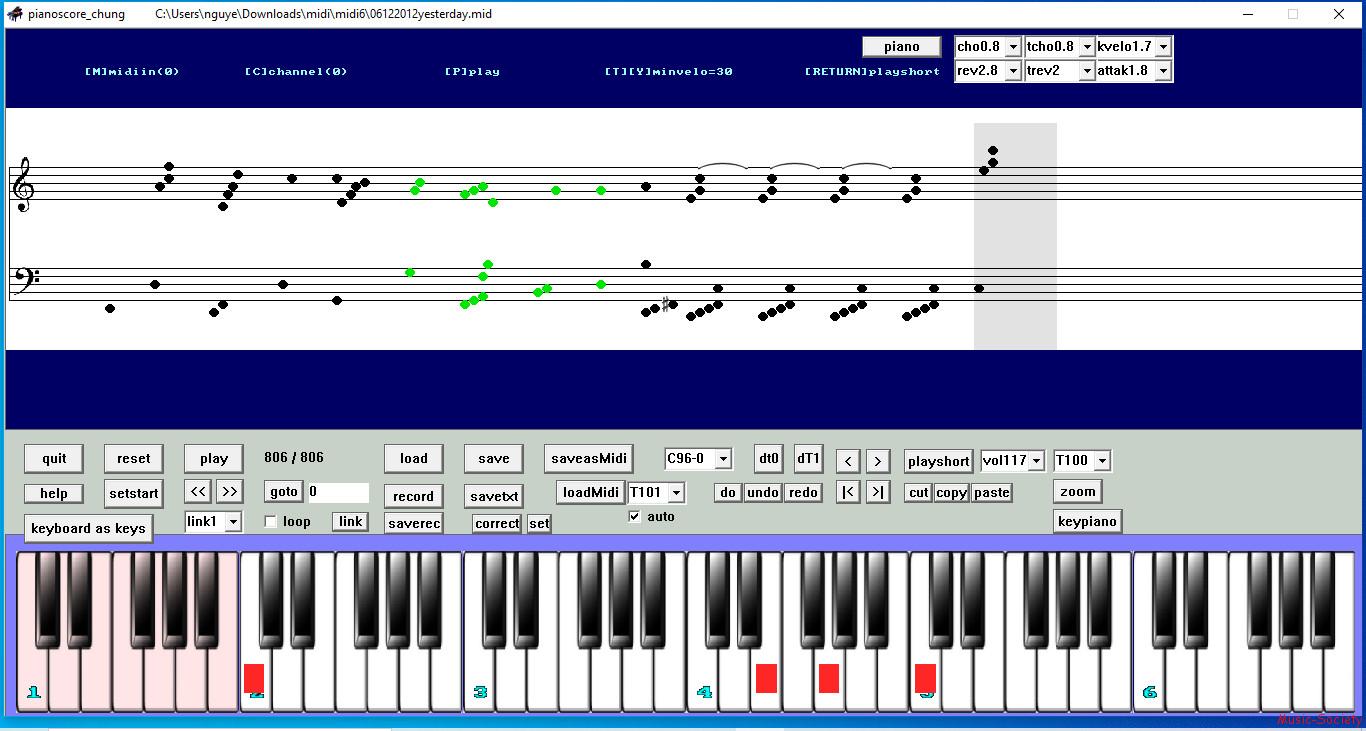 Good for “warming up” bass instruments, guitars and vocals, or for “gluing” stereo mixes and groups.

From Left-Right stereo signal Mid and Side signals are also extracted, then each of the four channels passes through 8x Upsampler, Gain Reduction Unit, Tanh waveshaper, Level Detection Unit, Filter, Downsampler and than all four channels are mixed to Left and Right output.

Set the desired amount of peak limiting, harmonic generation or distortion (Drive). Change type of the distortion (Power). Control the distortion of loud notes (Threshold). Control the responsiveness of the compressor (Attack, Release, VU, Gap, Knee and Para). Enhance stereo image (Link). Darken the distorted part of the signal (Filter). Move Mix knob towards 0% in order to lessen the effect, to bring back some original dynamics or just to compare with the input signal. Move Mix knob to 150% in order to strengthen the effect and ease settings of the parameters. Mix 200% can be useful in parallel chains of processors, but in most cases Mix should be at 100%.

Olitanh was made using iPlug2 C++ framework, and it evolved from Oli Larkin’s Oversampling Example. At first, it was just an exercise of adapting it from Mono to multichannel LRMS Stereo, but as I started to like its softness and was using it more and more in my daily productions, it deserved an upgrade. Power knob to bend the soft knee of Tanh curve. Filter knob to tame the highest harmonics and further decrease aliasing. The Compressor story. When I was excited about how versatile Olitanh became, it occurred to me that this would be just the right type of waveshaper to answer the common question: “Should I plug distortion after compressor or before?” As both answers have its own merits and its own flaws, the best of both worlds brings Olitanh – feedback compressor – where Compressor’s Level Detection Unit monitors Distortion’s output, but Compressor’s Gain Reduction Unit reduces Distortion’s input. Interdependent play of wave-shaping and envelope-shaping. 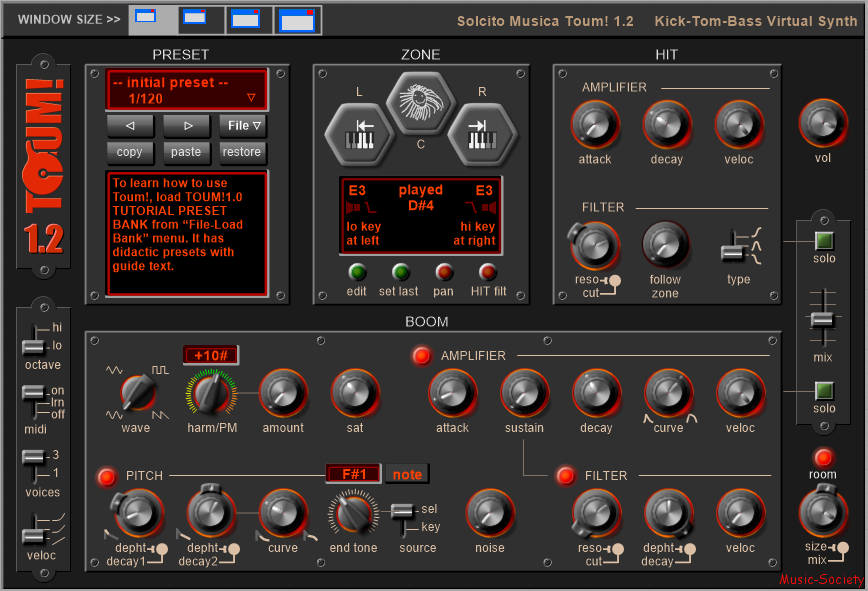 Toum! is a virtual synthesizer to design kick, tom, timbal, percussion and bass sounds. The user can use the include presets or make their own analog, acoustic and electronic drums, and EDM bass synth sounds. Also can be designed snares, clap, hats and certain FX sounds.
Toum! has a virtual analog structure and a small phase modulation component.

A song, recorded in the night, and mixed/mastered by day

A song with my self-constructed synth at the left channel, and the bassline in the intro.