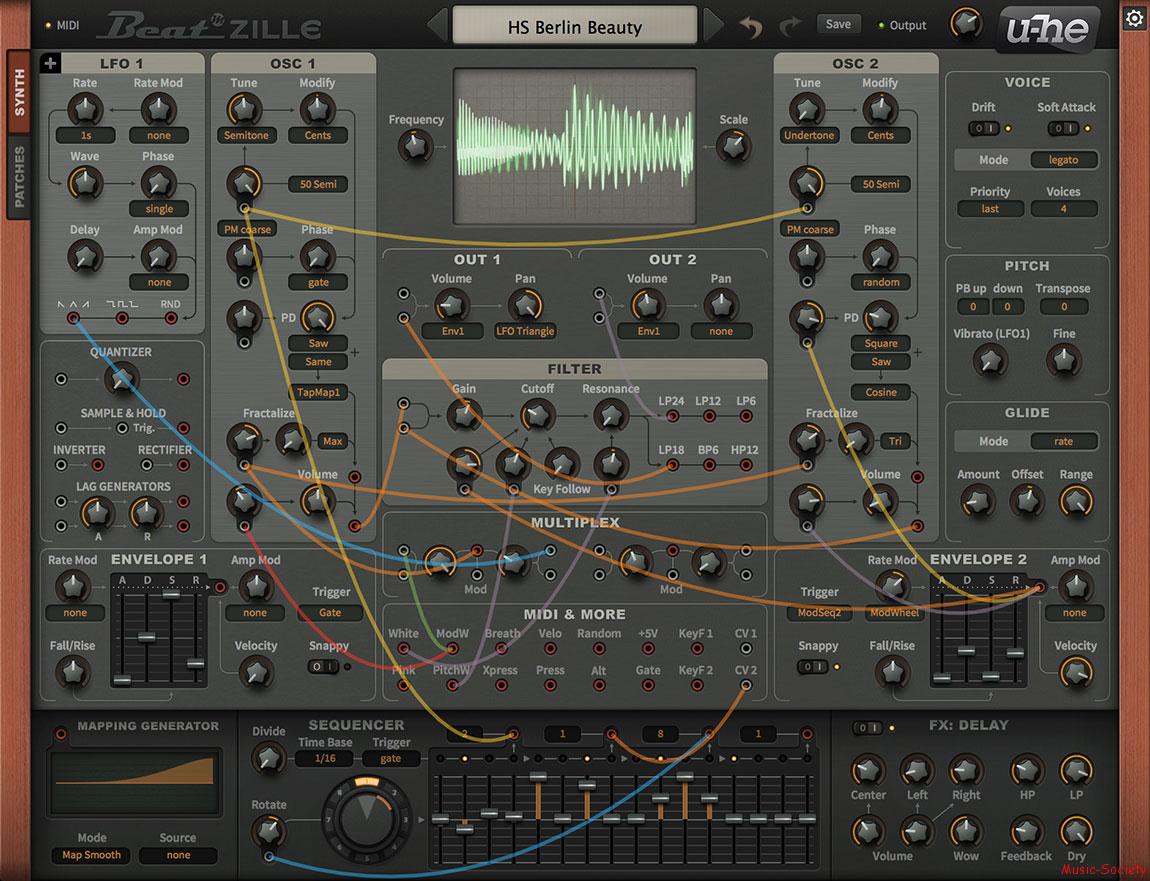 Beatzille: little monster
Beatzille is a compact version of our monster modular synthesizer Bazille. Although its condensed feature set makes it the ‘little brother’, Beatzille is still an engaging and capable synthesizer. Power and style run in the family. Digital oscillators, analogue-style filter and flexible patching will keep you busy for a good while before thinking about tackling Bazille.

Small and mighty
Striking the balance between too much and too little, Beatzille is the happy medium. It presents an introduction to modular synthesis and a taste of the power of Bazille without being overwhelming.

All three synthesis methods run simultaneously, so you can combine them to create an extensive range of sounds. Beatzille is great at generating weird modular blips and squeaks, but you can even coax soft pads and organic keys from the oscillators—as demonstrated by the factory library. Add modulation for even more sound possibilities.

Filter
The filter is a favourite in the sound designer’s toolkit. Cut frequencies, boost others, add texture and colour. Beatzille’s analogue-style filter complements the digital oscillators, providing warmth and drive. And its self-oscillation capability opens up some intriguing sound design opportunities.

Delay
Beatzille has only one built-in effect, but it’s good one: stereo delay with optional host sync. Push your sound around in space with independent delay times and volumes for each channel. Conjure ghostly echoes using tape-like wobble and filtering or set up endless repetitions. Tweak all controls to find the perfect delay.

The Windows installer was improved to prevent common installations issues. Please check the suggested installation paths during installation, making sure the update is installed into the same location as the previous version, and all installed plugin formats are being updated.

Envelope triggering via LFO and sequencer was reworked in order to fix multiple bugs in this area. This means some presets might not sound as intended anymore. We therefore recommend to finish ongoing projects before updating to the new version. Please refer to the “Patch Conversion Tips” file to get more info on how to adjust your presets.

Zebralette: easy spectral synth
Zebralette is our version of a Trojan horse. A free synthesizer and an introduction to Zebra2’s fantastic oscillators. Perhaps it will persuade you to try Zebra2 and upgrade. If one oscillator is this powerful, imagine what you can achieve with four… and all the other great features available in Zebra2.

-ette: an English suffix indicating a diminutive form
Zebralette is an introduction to Zebra2’s powerful oscillators. Zebra2 can seem overwhelming at first glance, so we stripped it down to a single oscillator plus a few other features and created Zebralette, the little Zebra. Once you master Zebralette you can move up to Zebra2 with confidence. And your presets can come with you, as Zebralette presets can be opened in Zebra2.

But more than a teaching tool, Zebralette is an incredible sounding synth in its own right. Surrounding Zebra’s spectral oscillator with a few core modulation options and effects make Zebralette highly capable. With unsion options (think supersaw, but Zebralette is not limited to saw waves, so we refer to it as superwave), 16 voice polyphony and two different envelopes, you have everything needed to create some marvellously complex sounds.

Zebra oscillator
One oscillator may not seem like enough for a synthesizer, but Zebra2 oscillators are rather powerful and clever.

It resembles many other oscillators you may have used. You can choose a waveset from the included library, or use the waveform editor to draw your own shapes. Here is where things start to get interesting: The Waveform Editor manages up to 16 different waves and lets you rearrange, duplicate and morph between individual waves. Use one of modulation sources and the WaveWarp control to scan through the 16 waves and create unusual, dynamic sounds.

There are four drawing modes: GeoMorph, SpectroMorph, GeoBlend, SpectroBlend, each offering a different approach to creating and manipulating waveforms.

Using the two Geo modes you draw the waveform shape using up to 32 points, while the Spectro modes let you create the harmonic spectrum over 128 columns. When using WaveWarp to scan through the waveset, Morph alters the waveform, whereas Blend blends (crossfades) between adjacent waves.

Formats
Zebralette is not a standalone product, it requires host software. Zebralette is compatible with nearly all DAWs. 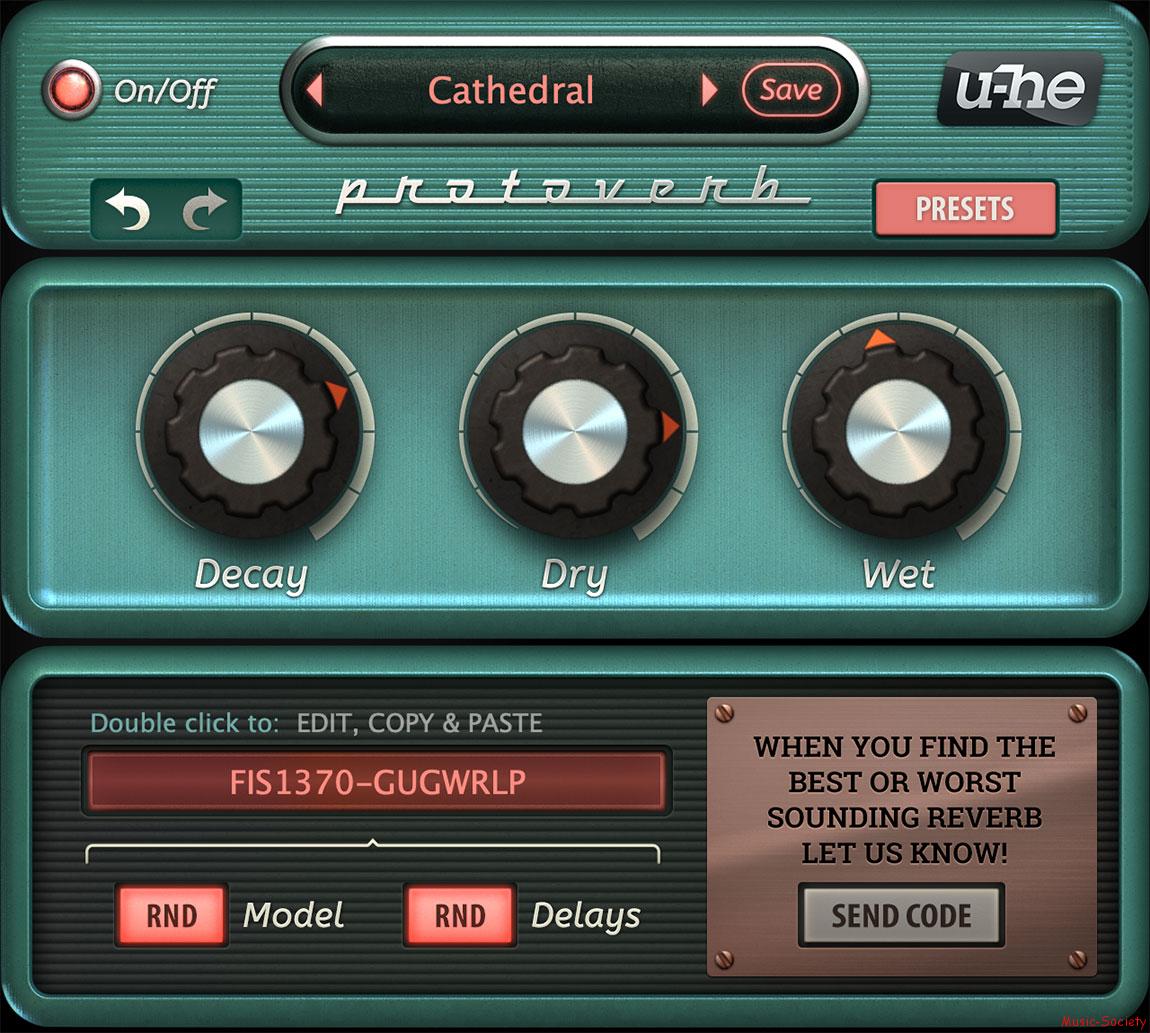 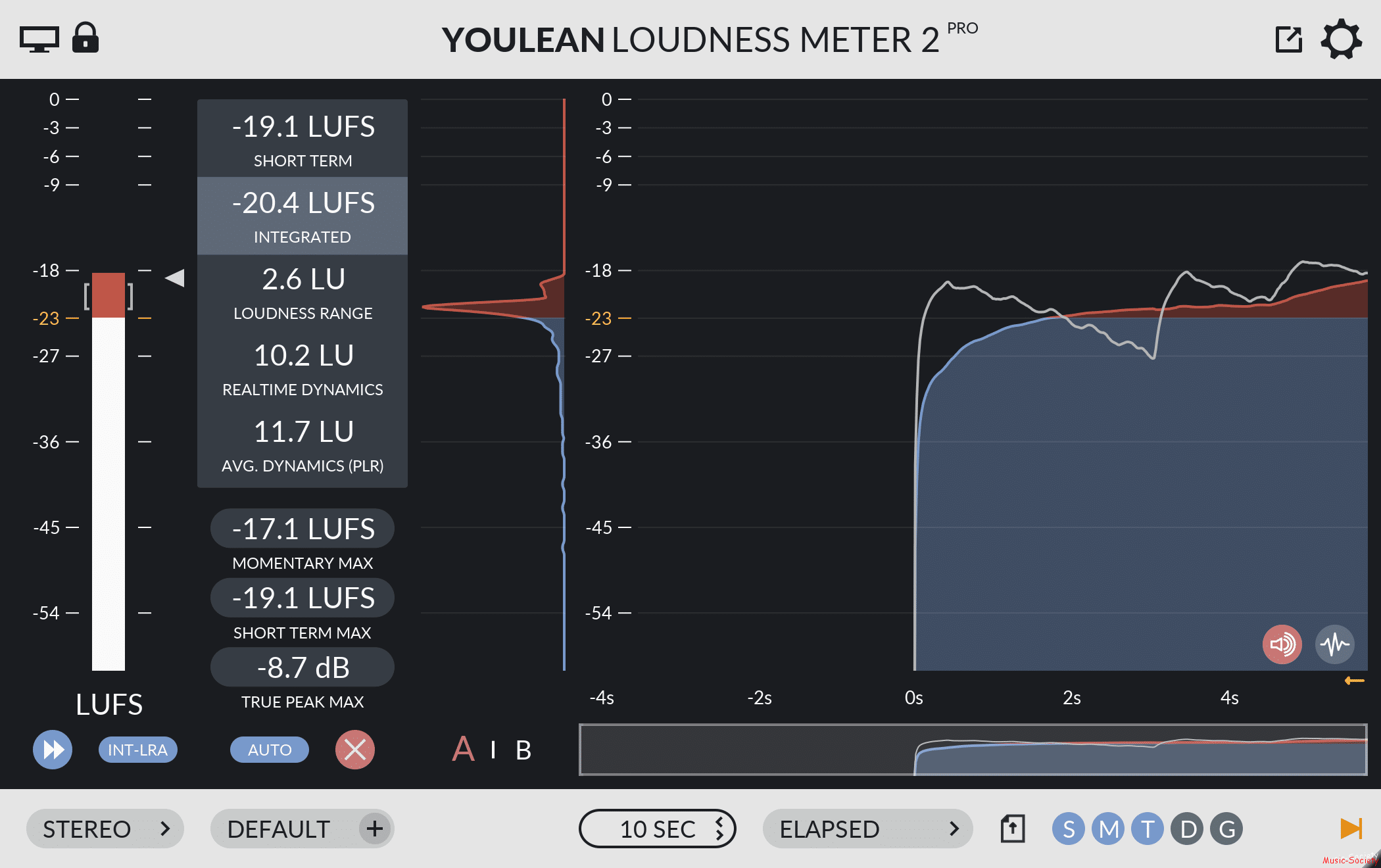 Youlean Loudness Meter helps you find the true perceived loudness of your audio and prepares it for TV or streaming services release.

Join the thousands of recording studios that already use it.

100% accurate metering
The plugin is calibrated and tested against ITU-R BS2217 testing materials.
It satisfies all requirements defined in ITU-R BS.1770 document.