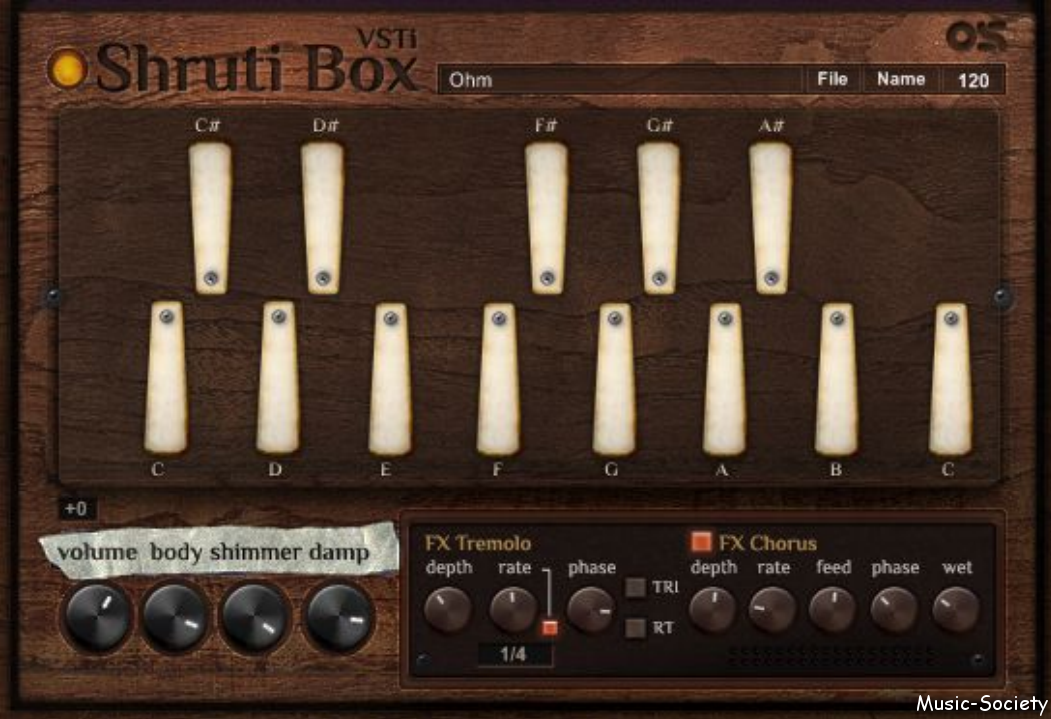 A very light drone based instrument for quick sonic backgrounds – inspired on the Indian instrument “Shruti Box” – Our version comes with a Tremolo Effect, a Chorus Effect and other controls for Core sound such has “Body” “Damp” and “Shimmer”

Shruti box VSTi inst a standard fully equipped synth, nor its meant to be! This is something different and much more simple, our VSTi follows the same concept has the original instrument – producing constant Background Drones to be accompanied with other instruments or singing, or whatever comes your mind!

“A shruti box (sruti box or surpeti) is an instrument that traditionally works on a system of bellows. It is similar to a harmonium and is used to provide a drone in a practice session or concert of Indian classical music. It is used as an accompaniment to other instruments and notably the flute. The shruti box is also used in classical singing. In classical singing the shruti box is used to help tune the voice. The use of the shruti box has widened with the cross-cultural influences of world music and new-age music to provide a drone for many other instruments as well as vocalists.” wikipedia

Octave:​ Sets the base octave for the note switches with a range of -2 to +2, with a setting of 0 representing the base canonical shruti sound.

Volume:​ Controls the overall loudness of the device.

Body:​ Controls the first harmonic of the drone sound. Set between 70-85% for the typical Indian shruti sound.

Shimmer:​ Adds brightness to the sound with an additional upper harmonic. Turn up for more ofa buzzing sound.

Note Switches:​ These turn on and off each available note across one full octave on a C scalewith an additional upper C note. Hold between two and four notes for the typical shruti dronesound.

Tremolo:​ A tremolo effect with selectable sine and triangle shapes and the ability to sync to thehost DAW tempo.

Stereo Chorus:​ A stereo chorus effect with controls for depth, rate, feedback, phase, and wetamount. The chorus can be turned on and off.ncert of Indian classical music.