Youlean Loudness Meter LITE is a professional iOS meter that will help you analyze LUFS and True Peak units, Spectrum, and Vectorscope. You can also analyze audio via a local Wi-Fi network coming from a desktop DAW like a Logic Pro.

The free version will have everything you need to get the job done. You can also upgrade to the PRO version to get some extra features.

– Analyze audio coming from a desktop DAW via audio over network feature.

With TL GFX Lite, you get a complete pocket-size guitar processor. Get access to massive collection of realistic sounding effects and amps right on your portable device.

ToneLib GFX Lite is a collection of guitar amps, speaker cabinets, and effects that let you easily turn your portable device into a powerful guitar and bass processor. With a massive collection of guitar effects and amps that fully captures the sound of their simulated equivalents, you can create a unique guitar tone and take it with you – to rehearsal, gig, or jam session.

A complete set of essential guitar amps and effects.

All ToneLib GFX gear is precision-modeled based on actual circuit diagrams of highly-sought-after, real-world products. The oversampling is auto-adjusted to your session’s sample rate to save valuable CPU power while providing the most transparent sound possible.

Among other things, ToneLib GFX Lite provides all the tools you need to organize your guitar practice routine: from a high-precision tuner to a full-featured rhythm player that includes both a variety of metronomes and a drum machine, with a huge number of recorded drum parts covering most musical genres.

• Possibility to create parallel effect chains with the Splitter tool.

• The number of effects in the chain is limited only by the capabilities of the device.

• Drag-and-drop effects in the chain for easy tone creation.

A2M detects the pitch of the audio and converts it into the corresponding MIDI notes in real time.

Thanks to this, you can play, e.g., the guitar, saxophone, or even sing, and simultaneously trigger sounds in virtual instruments (not only AU). These acoustic (or electric) instruments, or your voice, act as a MIDI controller.

A2M comes as an AU v3 plugin and as a standalone application (which is the AU host for this particular plugin).

A2M does not work as an AU plugin in GarageBand – on both iOS and MacOS.

A2M works (though imperfectly) as an AU plugin in Logic Pro (see below).

The standalone version works with all MIDI-compatible applications, including GarageBand (iOS and macOS) and Logic Pro. The app sends MIDI events via the virtual MIDI port. Active and inactive MIDI ports are available in the application settings in the MIDI Settings Outputs section.

The smaller the buffer, the higher the CPU load and the lower the latency.
A buffer less than 512 should only be set if you have a strong processor.
For A2M standalone applications, the buffer size is available in the application settings under Audio Settings Buffer Size.

Based on autocorrelation, the beat bars proprietary method.

– Gate Threshold and Input Gain
A2M works best when it only recognizes sounds at an appropriate volume level.

2 dashes (default) – the best compromise between accuracy and latency.
The higher the accuracy, the more of the CPU’s capacity is used and the longer the latency (as opposed to the audio buffer size settings):

It allows you to select the appropriate volume of the virtual instrument itself.

Known limitations in the current version: 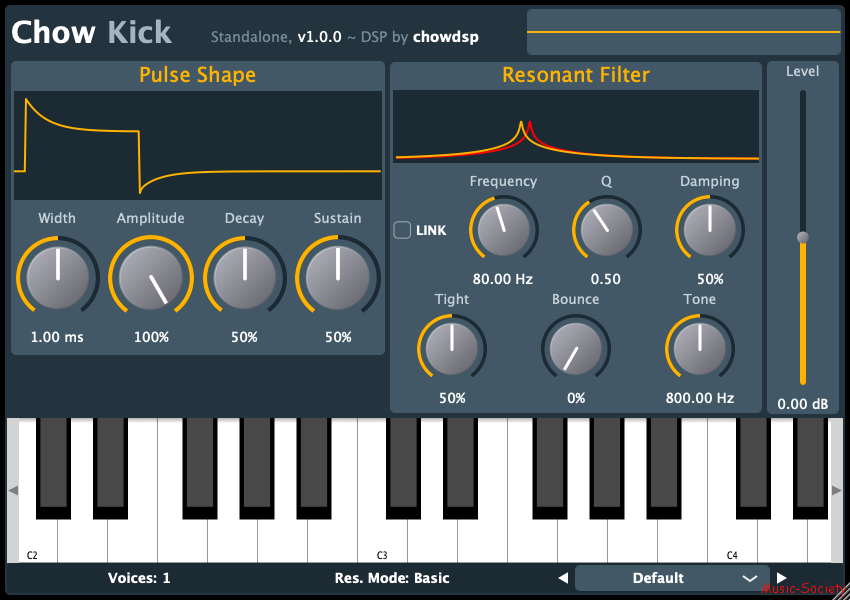 ChowKick is a kick drum synthesizer based on creative modelling of old drum machine circuits. Along with a highly parameterizable pulse shaper, Chow Kick uses a resonant filter with several nonlinear modes, creating a wide range of possibilities for sound designers. The kick drum can also be easily “tuned” with incoming MIDI notes to match the key of your song. 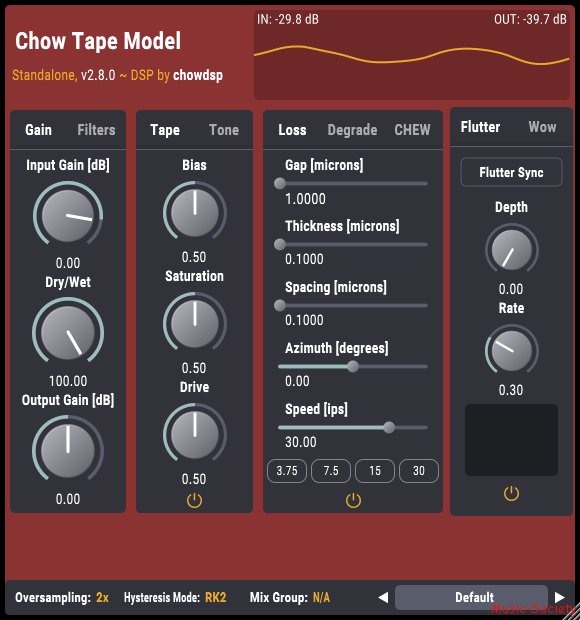 CHOW Tape is an analog tape machine physical model, originally based on the Sony TC-260. The current version can be used to emulate a wide variety of reel-to-reel tape machines. The physical modelling process is described in a technical paper presented at the 2019 DAFx conference. This work began part of a class project for Music 420 at Stanford University (CCRMA).

CHOW Tape is currently available in the following formats: 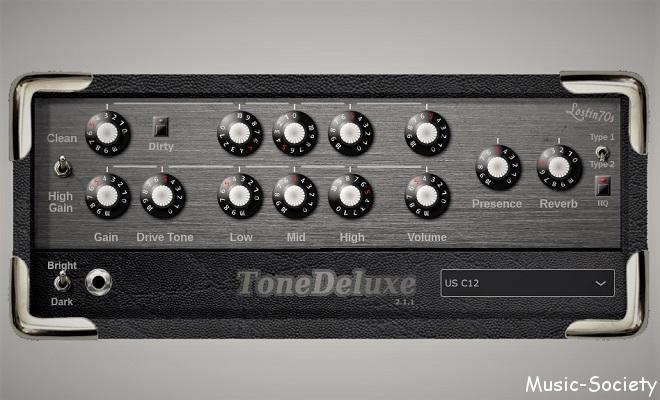 ToneDeluxe V2 is designed as a complete tube amplifier from the preamplification stage to the baffles. It is based on a simulation of the ECC83 and EL34 tubes, its temporal modeling makes it possible to reduce the signal processing time and This provides “pleasure to play” for guitarists. It offers two independent channels: clean and high gain. The high gain channel is versatile thanks to the DriveTone which cuts or boosts the high frequencies before the 3-band EQ. The Clean channel has a “Dirty” mode which allows boosting the gain and having a crunch of hell. 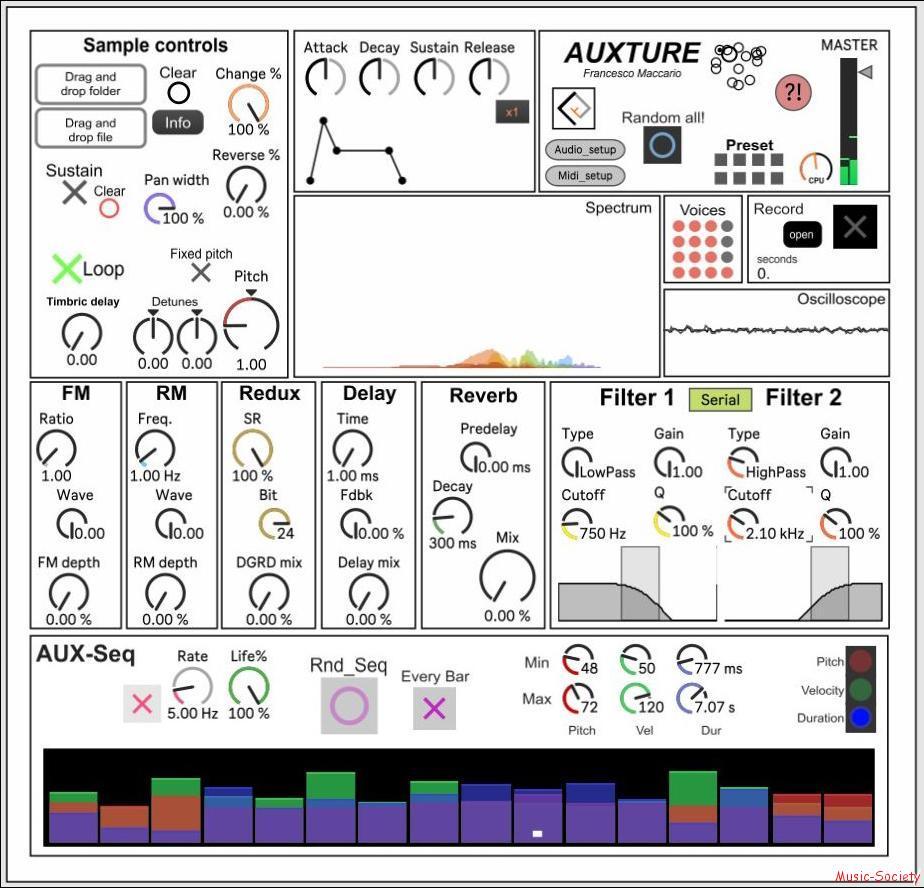 AUXTURE is a unique exploratory sampler and sequencer (AUX-Seq) which enables the user to manipulate and record single samples or entire folders of samples through gesture, randomness and modulation. Unexpected results are achieved via the audio exploration of single samples or entire folders through gestures, randomness and modulation. The software comes bundled with a ‘Slices’ folder containing 115 free to use samples.

AUXTURE processes your loaded samples across a myriad of random parameters. The results open up a unique portrayal of your sound.

When AUXTURE receives a note, it applies an exploratory set of processes resulting in unique outputs based on unexpected outcomes or happy accidents applied to your sample set.

It chooses a random sample from its memory according to a freely settable probability. It then plays it back with a rate proportional to the pitch.

Some parameters related to sample playback are directly settable, such as loop mode, pitch shift and detunes, while others are based on chance, such as choosing another sample or reverse playback.

A random delay of a few milliseconds allows a rapid and unpredictable timbre variation, while frequency and ring modulations alter the sample more heavily. For a subsequent smoothing of the sound and to ensure complete processing there are digital distortion, delay, a weird reverb and two second order filters. 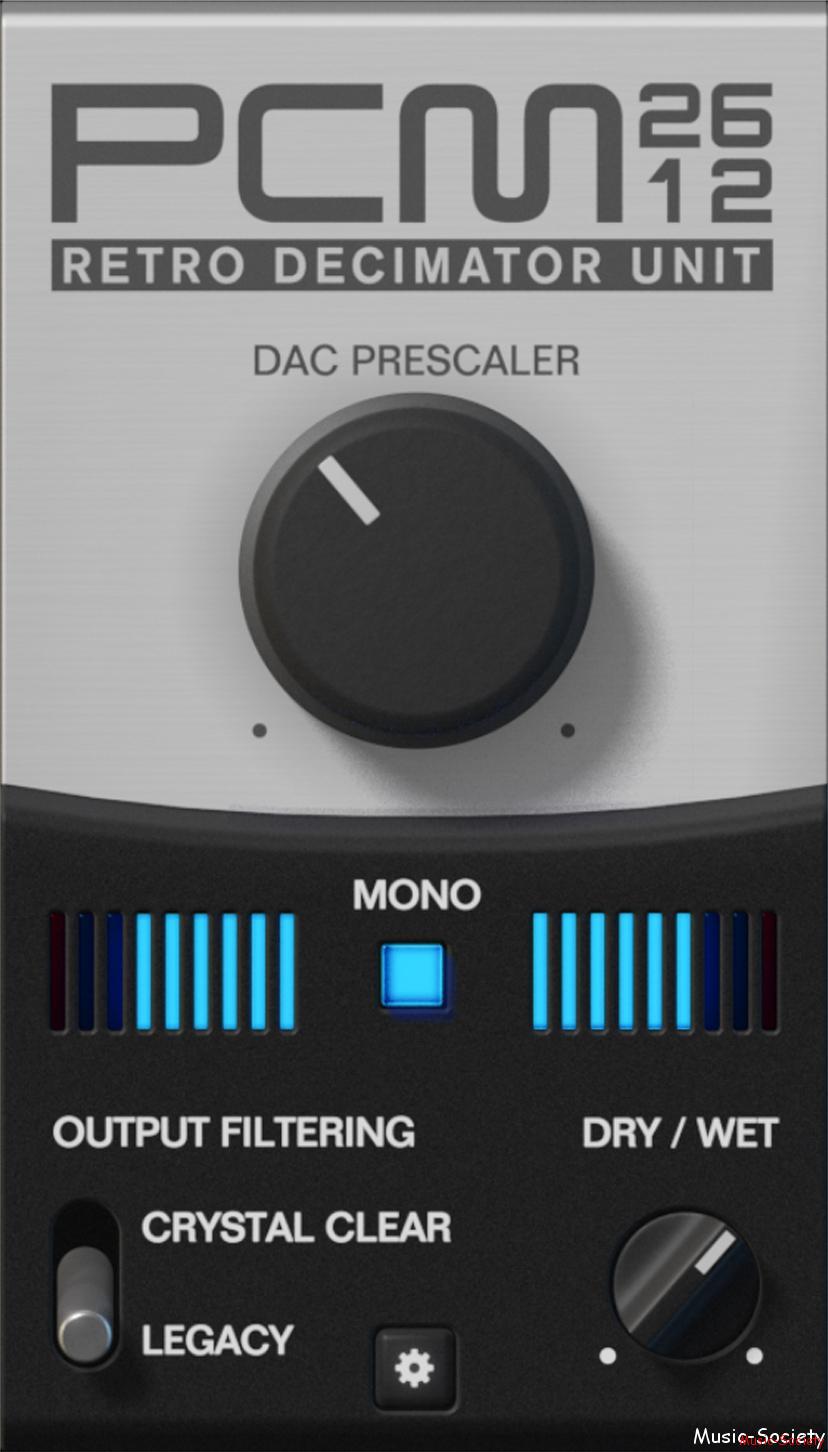 Inphonik has announced the release of a free bitcrusher effect plugin for Windows, macOS, GNU/Linux, and iOS.

Meet the PCM2612 Retro Decimator Unit, a bitcrusher effect plug-in with a distinctive legacy. Based on the work we made on the RYM2612 Iconic FM Synthesizer, our tribute emulation of the Sega Genesis sound chip, the 8-bit decimation is inherited from the FM synth’s PCM playback feature, packed in a simple and compact effect unit. Bonus: it’s free!

The effect is available in 64-bit VST/VST3, AU and AAX plugin formats, as a Rack Extension for Reason 10.1 and higher, and as an AUv3/IAA app for iOS. 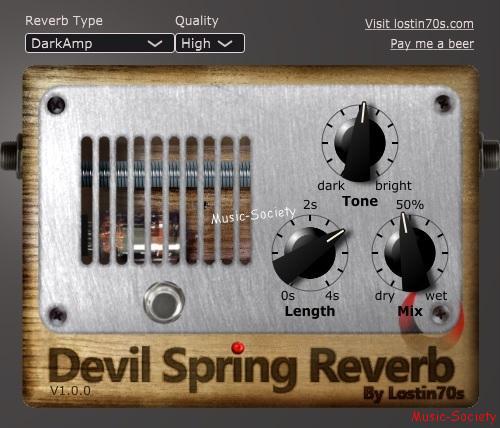 Boing Boing makes my old tube amp when I move it or when I wildly unplug my jack! Well now, you just have to move your favorite DAW to hear the evil melody of the wiggling spring. It’s vintage and It’s very warm. All the sounds come from impulse responses grappled on the web. They’ve been cleaned up and I’ve been working on a convolution reverb algorithm optimized with small onions (french expression to said fine tuning). Thanks to: Standford DUBBHISM Fokke van Saane Millertone …

Flux Mini is an audio effect that adds life, character and dynamism to your tracks. The customisable graph creates a shape which affects either the amplitude, low-pass filter or high-pass filter. You can emphasise the frequency modulation with the resonance knob too.

Pre-loaded with 20 presets to get you going, it won’t be long before you’ve built a plethora of shapes to accentuate your fantastic music.

From simple side-chains to manic modulations, sculpt some life into your sounds – flux it up and have some fluxing fun.

Available as: VST3 for Windows, AU + VST3 for MacOS and AUv3 for iOS and iPadOS. Please ensure your DAW supports one of these formats.